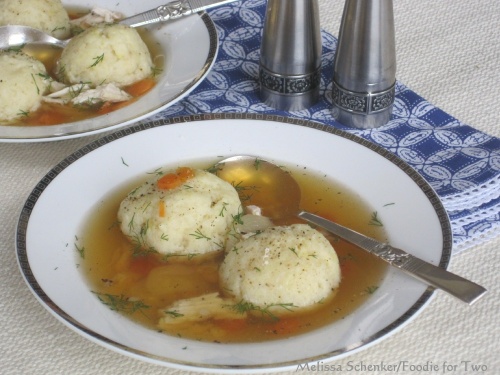 The first time I had matzo ball soup was in Tucson many years ago, during a Passover Seder dinner at my future in-laws home.  Up to that point my unique food experience with religion was watching others take a wafer dipped in wine or juice.  This Seder thing was a new experience for me – David’s family celebrated the holiday with some food that I had never eaten before: parsley dipped in salted water, hard-boiled eggs – again with salted water, pieces of matzo with fresh slices of horseradish root and charoset (an addicting mixture of chopped apples, dried fruit, spices and red wine), matzo ball soup, brisket and lots of wine.  I was in food heaven and taking part in a special, honored tradition of faith.  We have since moved away and today the recipes help us stay connected to the family traditions and carry them on from afar.  Thankfully, we have created new Seder memories with a dear group of friends and everyone has specific cooking duties for the evening.   We also bring the charoset and homemade horseradish to the Seder, both based on family recipes.  The soup recipe is from my late mother-in-law, Adele, and I am proud to carry on the recipe.  My only modification to the soup is the amount of chicken and vegetables I add back into the broth; I like more goodies than what she put in the soup.  One thing that still makes me smile today is when it came time to eat the gefilte fish (I tried it once, which was enough), I would always get a small plate of mini-meatballs instead.  I never asked for it but my little plate always appeared in front of me.  To me, matzo ball soup is total comfort food.  It is easy to prepare and most of the work is done in the pot.  The smells that permeate my home throughout the day are heartwarming.

The soup recipe is actually two-in-one; the first part produces a homemade chicken broth and the second gives you a soup. It uses a whole chicken, parsnips, leeks, carrots, onion and finished with fresh dill.  It’s all strained and reheated along with delicious matzo balls and the cooked chicken and vegetables.  Adele’s recipe calls for an “old chicken”, which she got from the kosher butcher.   I can’t find such a chicken so I use an organic bird – the closest you can get for flavor and quality.  I recommend using a whole bird (with skin on) instead of just thighs or breasts because you get more flavor.  To make it easier, ask your supermarket butcher (most meat departments are happy to do this for you if asked) to cut the bird up for you.  The chicken pieces are much easier to handle than a whole bird, and you can layer it in the pot with the vegetables.  I let the soup simmer for 2 to 3 hours in my 6 quart Dutch oven until the chicken falls off the bone.  For a lower fat option, I make the soup the day before, let it cool and refrigerate it overnight.  When chilled, a layer of fat collects on top, making it easy to scoop off before reheating.  David tells me his Mom used to save the fat for cooking later – a great example of using the whole bird and not wasting anything.

Being somewhat a creature of habit, when I find something that works I usually stick with it; Adele used the boxed matzo ball mix and so do I.  If you can, select the reduced sodium version – it has over 50% less salt!  I follow the directions on the box with one change: olive oil instead of vegetable oil in the batter.  Be sure to cook them in water that is at a gentle rolling boil.  I once thought I could rush the cooking time by increasing the heat and ended up with disintegrated matzo balls, quite a mess.   I also thought I would try the pasta trick of using salted water to cook the matzo balls and it was a flavor disaster.  Use a large pot of water – these little inch-size balls of uncooked matzo (pictured here) triple in size when cooked.  I love the texture – firm yet light and fluffy.  When done cooking, they go right into the soup and absorb the flavors, similar to adding pasta to a sauce.

In honor of family traditions and gatherings around food, here is a picture of Adele waving at a Passover dinner that we couldn’t attend; tulips were her favorite flowers.

This year Passover is from April 18 through April 26.  I have deliberately left out any religious explanations because I wouldn’t do the holiday justice.  If you would like to learn more, here are a few links:
What is Passover: Holiday and Observances
Judaism 101: Passover
Spertus Jewish Foundation
Wikipedia: Passover

Directions:
Season the chicken with salt and pepper.  In a 6 quart Dutch oven or large soup pot, add a layer of vegetables to the bottom of pan and continue layering with the chicken and vegetables.  Add the chicken broth and water so that the ingredients are completely covered.  Cover and simmer over low heat for two to three hours until the chicken falls off the bone.

Remove all of the vegetables and chicken pieces from the pot and place in a large strainer inside a large bowl to capture the juices (return juices to broth when done).  Strain the broth by passing a flat strainer through it a few times.  You can serve the soup at this point (see next paragraph) or let it cool, cover and refrigerate overnight to skim off the extra fat.  When the chicken meat has cooled, remove all of the meat from the bones (light and dark meat) and discard the bones.  Save three to four pieces of the carrot and parsnip for the soup.  Store meat and vegetables in a sealed container and refrigerate to finish soup the next day.

If eating the next day, reheat the soup and make the matzo balls:  Skim the layer of fat off the broth and reheat while cooking the matzo balls (cook according to package directions in a separate pot and add to the soup when done).  Slice the reserved carrots and parsnips into thin rounds and add back into the soup along with desired amount of shredded chicken – I use about 1 cup.  Add 1 tablespoon fresh chopped dill and salt and pepper to taste.   Serve hot with two to three matzo balls per bowl.

* Note about leeks: This vegetable needs to be washed very well and thoroughly because it has lots of layers for the dirt to hide in. The best way I found to clean it is to put the cut pieces in a large bowl of cold water and swish around several times to remove the dirt. Be sure to get the outer leaves near the root too. Let sit a few minutes in the water to allow the sediment to fall to the bottom of bowl.